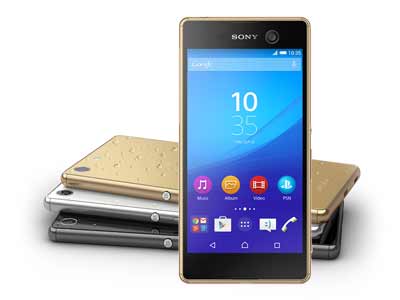 Sony Xperia M5 was release 3 weeks ago; it comes with Android 5.0 “Lollipop” with two variant one is single sim and other is dual sim in selected countries and marketing starts from mid-August. Sony yet not reveal the price of both models, but it is a high range smartphone so we can expect it’s near about ₹27,000/-.

Sony Xperia M5 or Sony Xperia M5 Dual is high end with top specification integration waterproof smartphone of mid-range. As I already mention that it has Android 5.0 “Lollipop” – which is the latest version of Google Operating System. This touchscreen 5 inch smartphone has Full-HD 1080 * 1920 pixels resolution and 441 ppi density with 64-bit octa-core MediaTek Helio X10 (MT6795) processor clocked at 2GHz, 3GB of RAM and 16GB of storage which is extendable up to 200 GB via microSD card.

On battery M5 has 2,600mAh removable battery which provide up to two days of battery backup and support GPRS/ EDGE, 3G, and 4G networks. You can also enjoy the on go music via FM radio which is connected via headphone – as for all FM radio providing smartphone do.

Sony Xperia M5 is available in market with 3 colors variant Gold, Black and White, which suits to everyone. M5 is the best mid-range phone for selfie and video lovers. If you are planning to buy Sony Xperia M5, go with it, it’s not a bad buy.