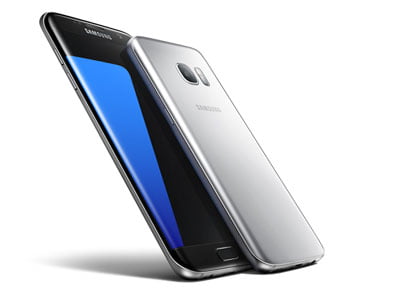 Samsung has announced the most rumored and talked-upon handsets: Samsung Galaxy S7 and S7 Edge. These two were launched in the same event where Xiaomi Mi 5 was launched. The two flagship phones have been improved upon its predecessors in several areas. Let’s have a close look at them: In terms of design, the biggest difference is seen on the S7 Edge. The S7 remains the standard at 5.1-inch, while the S7 Edge jumps to 5.5-inch. This implies that the Galaxy S7 Edge gives you a 16% bigger screen. The resolution display of both smartphones remains same at 2450 x 1440 pixels while the pixel density of S7 is 577ppi and that of S7 Edge is 534ppi. These smartwatch feature a new always-on display.

US, China and Japan customers will get the new Snapdragon 820 64-bit quad-core 2.15GHz processor for both smartphones. The other regions will get octa core Exynos 8990. Both Galaxy smartphones come with 4GB RAM and the internal storage options include: 32GB, 64GB and 128GB. An amazing surprise was the additional of microSD card. Samsung Galaxy S7 comes with a 3,000mAh battery and the S7 Edge has a slightly bigger battery with 3,600mAh. Both flagship phones come with built-in fast charging feature and support fast wireless charging as well.

Camera and Other Features

Interestingly, Samsung Galaxy S7 and S7 Edge feature same camera. They come with 12MP rear camera and 5MP front camera. Both come with built-in optical image stabilization. In terms of water-resistance features, they have been rated IP68. These phones come with fingerprint sensor and work with Gear VR. They run on Android Marshmallow, with Samsung’s custom TouchWiz UI layered on top.

A Quick Look at Samsung Galaxy S7 and S7 Edge:

Do you like the specifications of Samsung Galaxy S7 and S7 Edge? Share your thoughts with us in the comments.