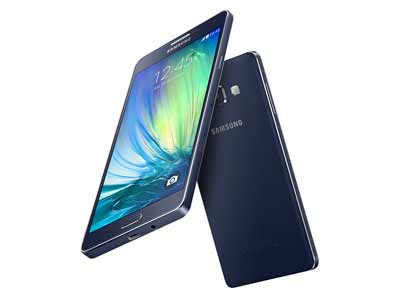 Samsung launches a new phone in February in its A series called Samsung Galaxy A7. It is the slimmest phone in the market eight-core 4G feature and metallic body. For users Samsung provide two versions of A7; “Samsung Galaxy A7” single sim at ₹29,590 and other is “Samsung Galaxy A7 Duos” dual sim at ₹30,499 is much cheaper than Samsung’s other high end phones.

This phone comes with Android 4.4 KitKat, which will disappoint users that it doesn’t have latest Android software called lollipop; even Samsung yet not announce any upgrade on this phone for lollipop. But its metallic body attracts users.

On the screen point it has 5.5-inch full HD Super-AMOLED screen of 1,080 * 1,920px resolution, ~401ppi. Galaxy A7 has a non-removable 2600mAh battery, which is much larger than other Samsung models of same range. Look of a screen is very good with 401ppi pixel.

A7 has comes with 16GB of built-in memory extendable up-to 64GB via microSD card.

For camera lovers A7 give 13-megapixel autofocus rear camera with LED flash and 5-megapixel front-facing camera for selfies. If you are selfie love then Samsung Galaxy A7’s wide selfie, rear-cam selfie, beauty face like features must attract you.

2 thoughts on “Samsung Galaxy A7”