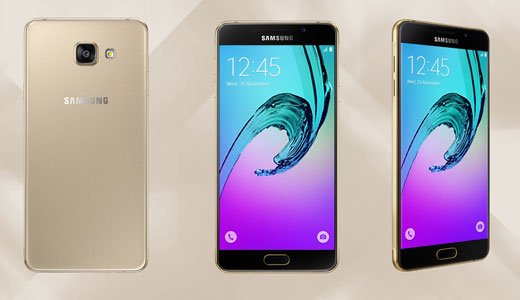 Both Samsung A Series smartphones incorporate metal and glass design. They come in white, black and gold color variants and look identical with only difference is the screen size. Samsung Galaxy A5 2016 features a 5.2-inch and A7 features a 5.5 inch FHD super AMOLED touchscreen display. They feature a three-sided metal frame and edges are rounded. Both come with power on the right side and volume buttons on the left side.

Both smartphones are powered by 1.6GHz octa core Exynos 7580 processor with 2GB RAM in A5 and 3GB on A7. These Samsung Galaxy A series smartphones come with 16GB of internal storage which can be expanded via microSD card.  The smartphones run on Android 5.1 Lollipop.

The latest duo from Samsung features a 13MP rear camera with LED flash and a 5MP selfie camera.  Samsung Galaxy A5 2016 comes with 2,900mAh battery while A7 features 3,300mAh battery with fast charging support. Both smartphones come with fingerprint sensor. A quick look at Samsung A Series smartphones: