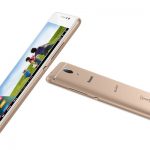 Panasonic has been successful with its Eluga Series of smartphones. The company has updated their series with inclusion of two new smartphones: Panasonic Eluga Ray X and Eluga Ray Max. Priced at ₹8,999/-; the smartphone is Flipkart exclusive. Here, we take a look at the features of Eluga Ray X:

Panasonic Eluga Ray X sports a 5.5-inch HD 2.5D curved glass display with Corning Gorilla Glass 3 protection. The display comes with resolution of 1280 * 720 pixels. Under the hood, it is powered by 1.3GHz quad-core MediaTek processor along with Mali-T720 GPU. It houses 3GB of RAM and 32GB of internal storage which can be expanded further via microSD card. The device runs Android Marshmallow operating system.

In terms of optics, the smartphone has a 13-megapixel rear camera and a 5-megapixel camera on the front with LED flash. The camera comes with several features such as panorama, HDR, professional, nightand more. Panasonic Eluga Ray X is backed by a big 4,000mAh battery which can last for more than a day.

A quick look at specifications of Panasonic Eluga Ray X:

Do you like Panasonic Eluga Ray X Smartphone? Let us know your thoughts in the comments.