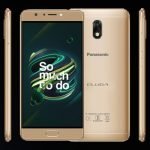 Panasonic has launched a new smartphone called Eluga Ray 700 in India for the price of ₹9,999/-. The smartphone is a Flipkart-exclusive smartphone. It is one of the competitive choices below the price of ₹10,000/-. The USP of the handset is the big battery and support for 4G VoLTE. Here, we take a close look at its features:

Panasonic Eluga Ray 700 features a 5.5-inch HD IPS display having resolution of 1080 * 1920 pixels. It is powered by a powerful octa-core MediaTek MTK6753 SoC clocked at 1.3GHz. It houses 3GB of RAM and has 32GB of inbuilt storage that one can expand further via microSD card up to 128GB. The handset runs Android 7.0 Nougat operating system.

In terms of optics, Panasonic Eluga Ray 700 has a 13-megapixel rear camera and a 13-megapixel selfie camera as well. The front camera comes with features like element lens 5P, aperture f/2.2 and modes like beauty mode and HDR. Both rear and front cameras come with flash. The smartphone is backed by a large 5000mAh battery. It runs its own Arbo Digital assistant.

A quick look at specifications of Panasonic Eluga Ray 700:

Do you like Panasonic Eluga Ray 700 smartphone? Let us know your views in the comments section below.