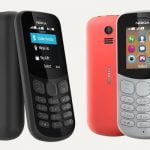 Nokia 130 (2017) feature phone is all set to compete with the similarly priced Jio Phone. Though the latter comes with 4G support, but the former also has a good say in the feature phone market. Nokia 130 (2017) comes with a price tag of ₹1,599/- and is available for purchase via offline retail stores across the country in red, black and grey colors. Let’s check out its features:

Nokia 130 (2017) sports a 1.8-inch QVGA colored display. It has rounded edges with a polycarbonate shell. This makes it easy to hold it for long. The phone has micro-USB port and 3.5mm audio jack at the top while the camera and speaker grille rest at the back. It runs Series 30+ software platform. This feature phone packs 4MB RAM and 8MB storage that can be expanded up to 32GB via microSD card.

The feature phone comes with 1020mAh battery that is rated to deliver up to 44 hours of FM radio music playback with headset or up to a month on standby. Nokia 130 (2017) comes preloaded with five try-and-buy Gameloft games – Nitro Racing, Sky Gift, Air Strike, Ninja Up and Danger Dash in addition to Snake Xenzia.

It is a dual SIM phone and comes with Bluetooth connectivity. It measures 111.5 * 48.4 * 14.2 mm. The phone includes a rear VGA which is capable of capturing videos. It also includes a 3.5mm audio jack, micro USB charging port and a flashlight.