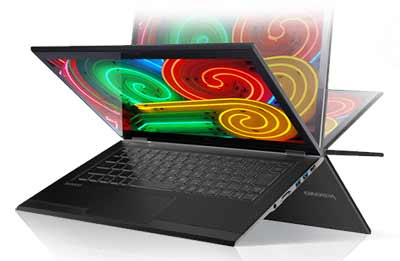 This is Lenovo’s best and high class 2-in-1 laptop, the main attractive feature of this laptop was its rotating to 360-degree – it became tablet when folded all the way back, but when you flip it tent like shape or any other in-between position this will not become tablet; it may be resolve soon in upcoming software update. You can only be using them in clamshell or tablet modes, not in-between them.

When you come for connectivity it has 802.11ac wireless Wi-Fi, Bluetooth 4.0, 2 USB 3.0 ports, 1 HDMI, a microSD card reader, and a combo mic and headphone jack. While you go video chat it will provide you 720p HD webcam. Z 360 has Li-polymer 6-cell battery which will provide you up to 7 hrs. video playback.

As usually the soft touch keyboard without num-pad & a very small backspace key, also it has FWD space which is the complete opposite of what the missing Delete key does. On a look & feel its identical to Lenovo’ previous LaVie Z.

I personally using Lenovo Z570 and I must say that what Lenovo say about its laptops it will provide. Lenovo’s laptops are worth going and it’s not a bad buy if you go with Lenovo LaVie Z 360.