iVoomi i1 and iVoomi i1s 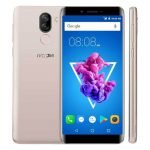 iVoomi has launched two new smartphones for the Indian users called iVoomi i1 and i1s. These are priced at ₹5,999/- and ₹7,499/- respectively. These are Flipkart exclusive smartphones and are known for their dual rear camera sensors. The only differences between the two are the RAM and internal storage. While iVoomi 1 comes with 2GB RAM and 16GB storage, iVoomi 1s sports 3GB RAM and 32GB internal storage. Here is the smartphone review:

iVoomi i1 and i1s sport 5.4-inch HD Infinity Edge display with screen resolution of 1280 * 640 pixels. Under the shell, they are powered by 1.4GHz quad-core MediaTek MT6737v SoC. One can expand the storage via microSD card up to 128GB. They run Android Nougat operating system.

In terms of optics, the smartphones bear a dual rear camera setup. These feature one 13-megapixel sensor and other 2-megapixel sensor along with an autofocus system and flash. At the front, they have an 8-megapixel camera for selfies and video calling. These are backed by 3000mAh battery.

A quick look at specifications of iVoomi i1 and iVoomi i1s:

What are your views about these newly launched smartphones? Share with us in the comments section.