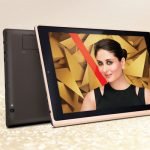 iBall expands its range of tablets in India with the launch of a new tablet called iBall Slide Elan 4G2. Priced at ₹13,999/-; the tablet comes in golden color options. It is available for purchase at all leading e-commerce platforms such as Amazon, Flipkart, TataCliq, Shopclues as well as on retail stores in the country. Here are the complete details about it:

In terms of specifications, iBall Slide Elan 4G2 sports a 10.1-inch multi-touch display with resolution of 1280 * 800 pixels. Under the hood, it is powered by a 1.3GHz quad-core processor along with 2GB of RAM. It houses 16GB of internal storage that can be expanded further via microSD card up to 32GB. The tablet runs Android 6.0 Marshmallow operating system.

The tablet sports a 5MP rear camera with LED flash and a 2MP front camera for selfies and video calling. It comes preloaded with features such as face detection, multi angle and many more. It is backed by 7000mAh battery and comes with an Intelligent Power Management that promises to get you through the entire day.

The connectivity options of iBall Slide Elan 4G2 include 4G VoLTE, 3G, Bluetooth, Wi-Fi, GPS and USB OTG. It measures 10.4mm in thickness and weighs 575 grams. The device comes with support for 21 Indian regional languages. It comes preloaded with utility, entertainment and music apps. You also get Cast Screen feature lets you mirror your tablet’s display to TV or monitor.

A quick look at specifications of iBall Slide Elan 4G2:

Do you like iBall Slide Elan 4G2? Let us know in the comments!