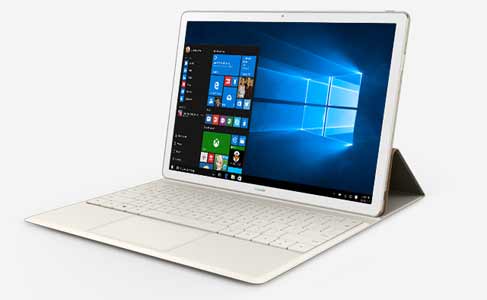 It transforms into a fully functional tablet with the additional of a keyboard cover. It also comes with a stylus accessory similar to the Surface Pen.

“With this landmark device, Huawei is demonstrating our industry-leading design and manufacturing expertise by bringing a beautifully crafted flagship product to market that is redefining the new style of business – connected computing across all devices in almost every scenario,” said Richard Yu, CEO, Huawei Consumer Business Group. This 2-in-1 Windows 10 device comes with a keyboard case and has really good battery life and a great display. The MateBook is built around a metal frame and has a metal back. It comes with 12” LCD display with 2160 * 1440 pixel resolution with a pixel density of 216ppi. The device comes with a slim bezel design with 64% screen-to-body ratio.

As far as the specifications are concerned, the Huawei MateBook comes in three models: HZ-109, HZ-W19, and HZ-W29. It is powered by 6th-generation Intel Core M3 processor along with 4GB of RAM and 128GB of SSD storage. The top model features Intel Core M7 clocked up to 3.1GHz with 68GB RAM and 512GB of SSD storage.

Talking about the camera, it features only one camera at 5MP resolution which should be good enough for Skype calls. According to Huawei, the Matebook comes with high-density Lithium battery that should provide about 10 hours of standard productivity work. Charging happens over a USB-C Cable and the tablet also comes with a fast-charging mode which gives you 60% charge in about two hours.

The tablet comes in both grey and golden and is light, slim and offers a premium feel. The tablet comes with an in-built fingerprint sensor. The connectivity options include 802.11 a/b/g/n/ac MIMO and 2.4GHz and 5GHz dual band support. It also features an ambient light sensor, gyroscope, hall effect, accelerometer etc. A Quick Look at Huawei Matebook: