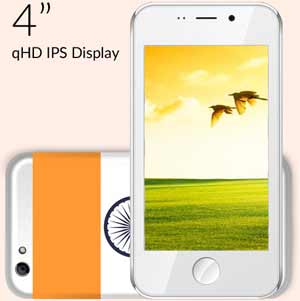 Domestic handset maker, Ringing Bells, has unveiled the most affordable smartphone called Freedom 251 and it is priced at just ₹251. It is arguably the cheapest smartphone in the world. The bookings for Freedom 251 start on 18 February at sharp 6 a.m. and close on 21 February 8 p.m. Let’s have a look at its features:

Freedom 251 sports a 4-inch IPS display with resolution of 540 pixels by 960 pixels. It is powered by a quad-core SoC clocked at 1.3GHz along with 3GB of RAM. It comes with 8GB of inbuilt storage which can be expanded via microSD card up to 32GB. Surprisingly, it runs Android 5.1 Lollipop. Yes, the company has managed to offer Lollipop at such price.

The low price does not mean the phone does not come with a camera. In fact, it comes with both rear and front camera. It packs a 3.2Mp primary camera and a 0.3 MP front shooter for selfies. It also supports 3G for lightning-fast web browsing. It comes with 1,450 mAh battery which won’t last you all day but no one can complain considering the price.

According to the company, it has been made with immense support from the Indian government and complies with government’s Make in India program. It comes preinstalled with apps like WhatsApp, more.

Ringing Bells assures that it has over 650 service centers across different parts of the country and is giving out one-year warranty on the handset. The company has confirmed that the deliveries of the phone will be completed by June 30. Freedom 251 will be available via its website.

Are you also excited about Freedom 251? Let us know your thoughts in the comments!