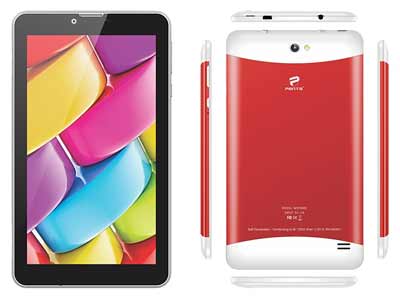 BSNL (Bharat Sanchar Nigam Limited) the name for Government telecommunication service provider in Bharat, they also introduce a series of low budget tablets with the name Penta. Firstly on February, 2012 BSNL launched three tablets in a market on collaboration with Noida-based Company Pantel Technologies. On September, 2015 they introduces new model in this series called BSNL Penta T-Pad WS704DX at the price of ₹ 4,999/-.

Penta is designed for students and have very good specification in such a low budget. 7-inch LCD display with 1024 * 600 pixels tablet is exclusively available via Homeshop18 with free keyboard cover worth ₹999/- as a promotional offer. This tablet has dual-core processor clocked at 1.3GHz coupled with 1GB of RAM and 8GB of inbuilt memory which expandable via microSD card up to 32GB.

BSNL Penta packs with 2 megapixel rear camera with LED flash and 0.3 megapixel front camera. You can also enjoy on the go music with its FM facility via a headphone connected through 3.5mm headphone jack.

Only 1st SIM provide you 3G voice calling facility. This is best for students to do their project and collage works – a handy-trendy, good looking, and low budget tablet. You can also enjoy the audio and video on loud speaker as well as headphone, play a game.