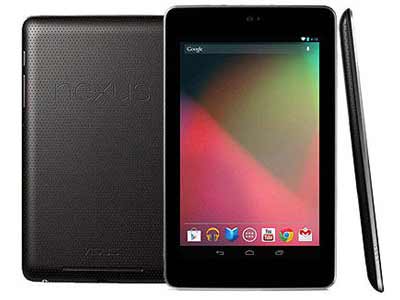 When Google launches its Nexus tablet with Asus in 2012, they give user very good gadget. From that time Google and Asus made many change, as every gadget require changes and enhancement to stable in market with same prize or lower. Today I am going to give my review about Asus Google Nexus 7.

New Nexus 7 dominated by the LED 7.02-inch display with 800 * 1280 pixels and 216 ppi pixel density. The front display is covered with a black strip of glass around the display, which blends with a slight seam to the back panel; this gives an elegant look to this tablet and on back it has a soft-touch coating, which appears to be made of polycarbonate material and which not give a very good look to this tablet but from front I like its look.

Nexus devices always come with little amount of hardware, like vise this new Nexus 7 also have no potential in hardware. It is driven by a quad-core Qualcomm Snapdragon S4 Pro processor clocked at 1.5GHz with Adreno 320 GPU clocked at 400MHz and 2GB of RAM. Nexus 7 comes with two versions of storage with 16GB and 32GB, but don’t have any slot for microSD card. Also the new Nexus 7 comes with SIM support which provides you cellular networks for data uses even in bad signals.

If I go with camera then Asus Nexus 7 provide 5-megapixel rear camera. By providing rear camera Asus Google Nexus 7 become the first Nexus tablet which has rear camera. It has 1.2-megapixel front-facing camera for selfie and skype chat.