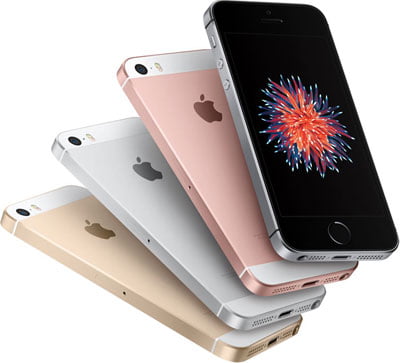 Apple has unveiled the iPhone SE at the conference in California. Apple has surprised everyone by offering a smaller 4-inch iPhone. With companies continue to offering bigger screens, Apple has taken a different route and announced this iPhone with 4-inch display.  It is meant to meet the demand for a smaller iPhone as well as demand for a cheap iPhone.

The iPhone SE sports a 4-inch display and comes in two storage variants: 16GB and 64GB. The new iPhone comes with Apple’s vaunted A9 chip which is much faster as compared to entry-level phone launched in 2013. It is expected to arrive in India in April at the starting price of ₹39,000/-. It runs the updated iOS 9.3 operating system. The new iPhone SE will have the new A9 chipset, support 4K video and Apple Pay.

Other specifications of the device include 12MP rear camera, 1.2MP front camera and Touch ID. It will boost faster LTE and faster Wi-Fi speeds and improved battery life. In terms of connectivity, it supports Bluetooth 4.2, enhanced Wi-Fi and LTE and comes with Touch ID fingerprint sensor. It will be available in Silver, Gold, Rose Gold and Gray color options.

With cheaper mode, Google is expecting to stimulate overall iPhone sales in emerging markets and China, world’s biggest buyer of smartphones. Apple also unveiled new leather cases for the iPhone SE. It will be available in Black and Midnight Blue color options at the price of ₹2,900/-. The company also revealed Lightning Dock pricing at ₹3,700/-. A quick look at iPhone SE:

Are you impressed with features of iPhone SE? Share your thoughts with us in the comments.