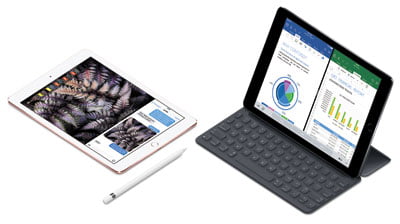 At Apple’s “Let us Loop You In” event, in addition to unveiling of iPhone SE, iPad Pro 9.7-inch has also been launched. Let’s have a close look at its features:

Camera and Other Features

On the camera front, the iPad Pro comes with 12-megapixel iSight Camera and a 5-megapixel Facetime camera. The camera is exactly like the one as iPhone SE. The tablet also supports Live Photos. The iPad Pro 9.7-inch comes with support for Apple Pencil and Smart Keyboard. Other key features include Touch ID fingerprint sensor, 10-hour battery life, and four speakers.

Apple has also revealed the price of the tablet in India. It will hit store shelves from 8 April 2016. It comes in Silver, Space Grey, Rose Gold and Gold color variants and will start at ₹49,900 for the 32GB storage variant (Wi-Fi only) and ₹61,900 for the 32GB storage variant (Wi-Fi + Cellular). In addition, Apple has also revealed pricing of Apple Pencil at ₹8,600, the smart keyboard at ₹13,900 and Polyurethane iPad Pro Smart Cover at ₹3,700.

What are your thoughts about iPad Pro 9.7-inch? Share with us in the comments.

Here is the official video for Apple iPad Pro 9.7 inch from www.apple.com :